When we first started building the original street level home of The Crafty Lady on 50th Street (Main Street), there were a number of glitches along the way, the first of which was my father being laid up in the hospital with paracarditis.

As a retired building construction teacher at the high school in town, retired building supervisor at many construction sites throughout the province and an all round handy man, having to stay in the hospital in order to keep his position in line for surgery seemed worse than the number of blockages that needed to be fixed. He wanted to get his hands dirty and supervise the build. Between us visiting daily to keep him apprised of the progress and our self-proclaimed superintendent, Mr. Gimbel, keeping the workers on their toes, we kept him from going crazy (pictured below with my brother Ron who was keeping things going at Home Hardware) 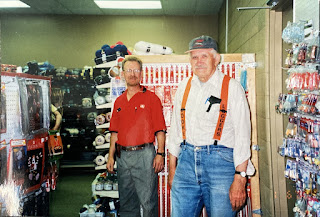 even when the owner of the neighbouring building came rushing over to tell us that by digging the basement, his basement wall was crumbling! So much for the proposed ceramics and stained glass I had planned on bringing in.

Then, while we were building a new building, the town was beautifying the street with trees. While the building was under tarps. They were planting a tree. Directly in front of the door. Smack dab in the middle of the entrance to the store. The tree got moved.

Thankfully, there were no other glitches. Dad got released from the hospital and the second he got the green light from his doctor, he was back up on the scaffolding installing a dropped ceiling.

Months later, we held our Grand Opening with the help of then Mayor Judy Gordon and Peter Bouwsema, the architect who brought my vision to life. 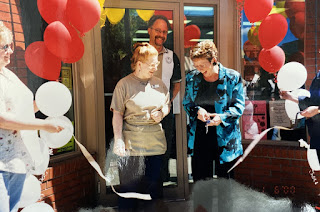 Then there was the move to the current location. Thanks to well timed road construction of Highway 12 (the road people call Main Street), Mom and I were able to wheel all the stock around the corner. The girls kept the store at 5009 running smoothly, calling or texting for Mom or me to run stock back over to sell, while we arranged the store so that it would be ready by July 1. We only had one hour without debit / credit card sales during that whole time. The hardest part of the whole move was convincing people that we were literally around the corner!

Even now, moving everything from the store to the warehouse - yes, we've already started - I could not do it without the collaboration of Mom, Margaret and Anne. Mom is soon going to be 86 years old and she can still keep up to me! In fact, she can sometimes play me out. :) I'm fairly certain she will be supervising (read: getting her hands dirty) when I start remodeling the RV to accommodate all the yarn I will be selling come spring. I expect I will also have a travelling companion and shelf restocker once the store is on the road.

Until then, there's still lots of product at 25% off that we would love for you to buy so that we don't have to haul it to the warehouse. 😉

written by Lori, happy TCL owner who knows the real work is still ahead.
Posted by Crafty Lady at 9:06 AM