Fly Me to the Moon

Are you a moon watcher?

Do you pay attention to the phases of the moon or carry some suspicion about what happens when the moon is full?

Do you do your best to go out to see 'special' sightings of the moon -- like a 'blue moon' or a 'blood moon'?

Or are you more romantic about this subject, enjoying walks under the moon, or songs about '[spooning] by the light of the silvery moon'?

Do you love the sight of a rising or setting moon or the glow of a bright moon on the snow on a crisp winter's night?

And...did you know there's a gemstone named after the moon -- so named by the Romans because of a belief that it was composed of rays of moonlight that had been solidified on the earth?  Both they and the Greeks associated this stone with their various lunar deities, and named it (rather obviously) "moonstone".

But as a polished gemstone, it has a glow to it that's simply beautiful.
Cut and polished into a cabochon, it rather resembles the moon.


It's this wee bit of a glow, this shine and glimmer, that was inserted into the yarn we're offering this week as our Super Special Sale -- just in time for you to knit up something for the Holiday season that includes -- as mentioned in an earlier post -- a bit of the 'bling' so fashionable this season! 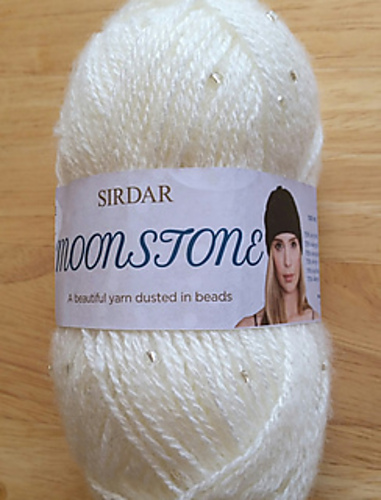 And the projects?  Everything from pretty hats to wraps, shawls, shrugs and full sweaters!  Just think!  The New Moon is just peeking out this week.  If you cast on by Tuesday, you could have several hats completed or a good leg up on a shawl by the time the Full Moon rolls in on October 24!

Well...what are you waiting for?
The Light of the Silvery Moon? 😉

*Written by Margaret, happy TCL employee who'll knit during any phase of the moon!
Posted by Margaret at 8:58 AM

Email ThisBlogThis!Share to TwitterShare to FacebookShare to Pinterest
Labels: 75% off sale, Moonstone, Sirdar