Here in these northern climes, winter storms can creep in slowly, with plenty of warning -- or roll in on a wild wind with no warning whatsoever.

I know that as a yarn-crafter, regardless of how a snow-blow arrives, I'm happiest when I've successfully found shelter in my living room or cozy bed -- knitting projects at the ready, and a cuppa something hot nearby.

Down in the southern hemisphere -- in Uruguay, to be specific (see it there at left, just below Brazil, on the east coast?) -- weather can be equally unpredictable, especially on the ocean, in a country with a dearth of mountains that usually act as weather barriers.  As a result, though the climate is considered temperate, anywhere you live in Uruguay, you'll find rapid changes in weather and a particular vulnerability to high winds.

Taking shelter is a challenge!

"Abrigo" is the Spanish word for 'shelter'.  "Mal" means -- as it does in the French -- well..."bad".  And there are several towns on the continent of South America named "Mal Abrigo" ("Bad Shelter") -- meaning that they're not very good places to be amidst those unpredictable winds and stormy weather patterns!


One of the places named "Mal Abrigo" happens to be in Uruguay.  This is the place after which the yarn in this week's Super Special is named.  Especially back in the day when folks rode on horseback from place to place, the little village of Mal Abrigo was reputedly a very bad place to stop for the night, especially in stormy weather!

But...when the family that founded Malabrigo Yarns was looking for a name for its company, it decided -- inspired by novelists such as Faulkner and Garcia Marquez -- to name it for a quasi-imaginary village of the same name as one that really exists.

That's the explanation given on the company's website, anyway. And it makes some sense when you read that they create their yarns out of 100% Uruguayan merino wool, and kettle dye them in colours inspired by the nature, art, and culture of Uruguay.

They produce yarn in smaller quantities because of their business practices, which are founded on tradition and environmental sustainability.  This means their yarns are often difficult to come by and arrive in smaller amounts.

We've been blessed to carry Malabrigo yarns for some years...but at the moment, we have only a limited quantity.  This week's Super Special is... 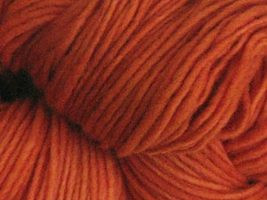 
Lest you wonder what you can make from this, be advised that a whopping 137,555 projects listed on Ravelry feature this yarn!!  Many shown are hats and mittens that require one skein or less.  As there are 500 pages of such projects (!) I'm not even going to begin to pick out one or two to show here.  Rather, I suggest you follow the links and find one that suits your needs and time frame (if you're knitting something last-minute for Christmas).

And don't forget felting!  If you want to knit up and wet-felt some slippers, or use it in a needle- or wet-felted landscape or 'critter' project, this very lightly spun merino will work beautifully for you.

So...before another winter storm moves in, stop in for some yarn-filled shelter at The Crafty Lady, and have a look not just at our Super Special, but at all we have on offer.

Please note that between now and December 22, we are open 9 a.m. to 9 p.m. Monday through Friday, and 9 a.m. to 6 p.m. on Saturdays (still closed Sundays).  We'll likely close early Christmas Eve, and we will be closed Christmas Day and Boxing Day.

See you at the Shop!


*Written by Margaret, who takes shelter with yarn every chance she gets, in all kinds of weather!

Email ThisBlogThis!Share to TwitterShare to FacebookShare to Pinterest
Labels: 75% off sale, Malabrigo worsted