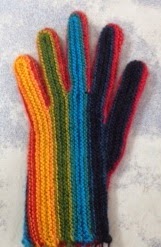 When I saw Lori designing this thing it looked like a spider web of cables. I was expecting one of them to reach up and strangle someone, like in a movie I saw when I was a kid, where plants managed to creep into people's houses and climb up on them and squeeze them until they died of suffocation.

Yeah, like that. My mom was really good about letting me watch bad horror movies. I think she just didn't want to watch them alone so it was nice having a six year old hold her hand when she got scared.

She calls it her most difficult pattern. 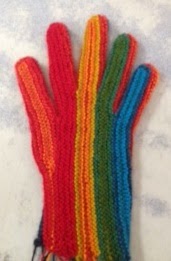 But that isn't going to dissuade you knitters, now is it? Not those of you who are tried and true and like a challenge.

I received this email earlier today and I was so moved by it that I had to share (with permission, of course)."Hello The Crafty Lady!I received a ball of yarn and the pattern for the Lorigami Gloves as a Christmas present, from my Mother-In-Law.
I phoned your store in January, as I wasn’t sure I had enough yarn for the project – I was assured that I did, have enough (1 ball of Katia Darling, colour201 – beautiful!)
I decided to try out the pattern with some spare sock yarn before committing whole-heartedly to the “Good Stuff”.
It took me 3 tries to figure it all out – an Evil Genius created this pattern!!
My sample glove was knit on size 3mm needles, as specified in the pattern – I found them a bit snug, so I moved up to a 3.25mm needle.
I was distracted by a few socks that needed to be knit in the interim, but finally finished my gloves this week.
I LOVE them!
They are warm and give all my knitting friends the “willies” trying to figure them out. wink emoticon
I will definitely make several more pairs of these – perhaps in the longer version to more fully cover my wrists.
As to the yardage on the yarn……..I finished with 5 yds remaining – a bit scary, but, as promised, Enough. wink emoticon
Lori, you truly are a genius and an “outside-the-box” thinker.
I greatly enjoyed the figuring-out of this pattern, and seeing it all come together.
Thank-you.

So if you're looking for something different, something exciting, something challenging, then I dare you!