When I was a kid I read a story called Stone Soup. In it a wanderer approaches a cottage. When he knocks on the door a woman answers. He begs her for some food and she tells him she can't give him any because she doesn't have any. So he tells her that he can show her how to make soup from a stone.

Which makes me start asking "if he can make soup from a stone why is he going around begging for food?"

She doesn't think this though because she's not internet savvy, so excited about the prospect of making soup from a rock which is free, she invites the stranger in. This was back in those much safer days when you let strangers into your home even if they were carrying weapons and there were no laws to protect the commoner and seeing people hanging from trees and heads on pikes was a perfectly normal thing.

They get a roaring fire going in the fireplace and they put a cauldron over it (hey first sign of a witch - a cauldron) and they put the wanderer's magic stone and some water into the cauldron. They boil it for awhile and then the wanderer says "you know, this soup would be better if we had some vegetables. Do  you have any?"

And so the woman goes to her cold room which is anywhere in the house that doesn't have a fire and she produces some potatoes, carrots and onions. They peel them and throw that into the pot and then the wanderer says "it's too bad that we don't have any meat."

So the lady says "I think I might be able to find something," She goes to her larder and finds the remains of the chicken that she ate the night before and they add that to the soup because back then it was perfectly safe to eat chicken that's been sitting out all night since salmonella hadn't been invented yet.

And then the wanderer says "I don't suppose you have any herbs, just to add a bit of flavor?" She goes out to her garden and she gathers up some herbs and they chop them up and throw them into the pot along with some incantations of blessings and good wishes because, you know, they have a cauldron.

Meanwhile as they wait for the stone to magically produce the soup, the wanderer entertains her with songs, tricks and games and they have a lovely chat by the fire. They exchange contact information and she tells him about the husband that died and the ungrateful children who no longer call on her and he tells her how he lost his entire family in a village fire set by the evil king's soldiers and now he wanders the countryside seeking revenge.

The fact that she is alone in her house with a tormented revenge seeker doesn't bother her at all.

When the soup is done he takes out his stone and pockets it and they have a lovely meal together. She gives him a bed by the fire for the night and he leaves the next day, rejuvenated and with a full tummy and she feels refreshed from the company and the new knowledge of making soup from a stone.

So what has this got to do with knitting?

Not long ago, necessity required knitting. Want a sweater? You knitted it. Want socks? You knitted it. Want a blanket? You knitted it. Knitting was not leisure time. It was work. Women walked around the house doing chores and knitting. Back then they were able to produce two extra arms to do this. They could knit, feed the baby, stir the laundry in the pot, and sweep the floor all at the same time. If you didn't have yarn you unraveled something to make something else. It was not considered fun times when you wanted a hobby to do. People who had to knit didn't have hobbies. They had work and sleep.

Now if you need something, you go to the store. You can pick up a ten pack of socks for like ninety-nine cents. You buy a sweater for under twenty. Whatever you want you can buy cheaply enough and still have money for lunch in the food court.

However to make a single pair of socks you pay about twenty dollars for a skein of yarn. It's not financially practical. Necessity has become the stone.

We don't knit for necessity, no matter how much we tell ourselves that we use that stone. We have filled our cauldrons with other ingredients for feeding ourselves and we make connections with other wanderers through life, with knitting.

Which brings us to today's sale. It's a lovely yarn, perfect for sweaters, scarves, cowls, hats, and mittens. 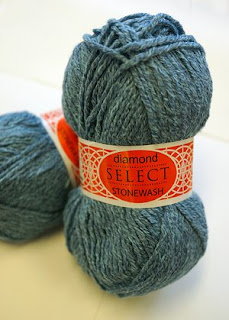 Posted by Anna Maria Junus (happy employee who has never eaten stone soup or been stoned).